Piano recording session made by Rex Roach and Lew Scharpf in October 2016 in Opelika, Alabama

The piano is a very nice Steinway Model D concert grand in the Arts Center in Opelika, Alabama, our home town. The center was an old school house built in the 1930ĺs. The auditorium is extremely bright with hard plaster walls and ceiling, and wood floors. It was a challenge which took more than one session to arrive at a sound that pleased us when played back on a good system at home. 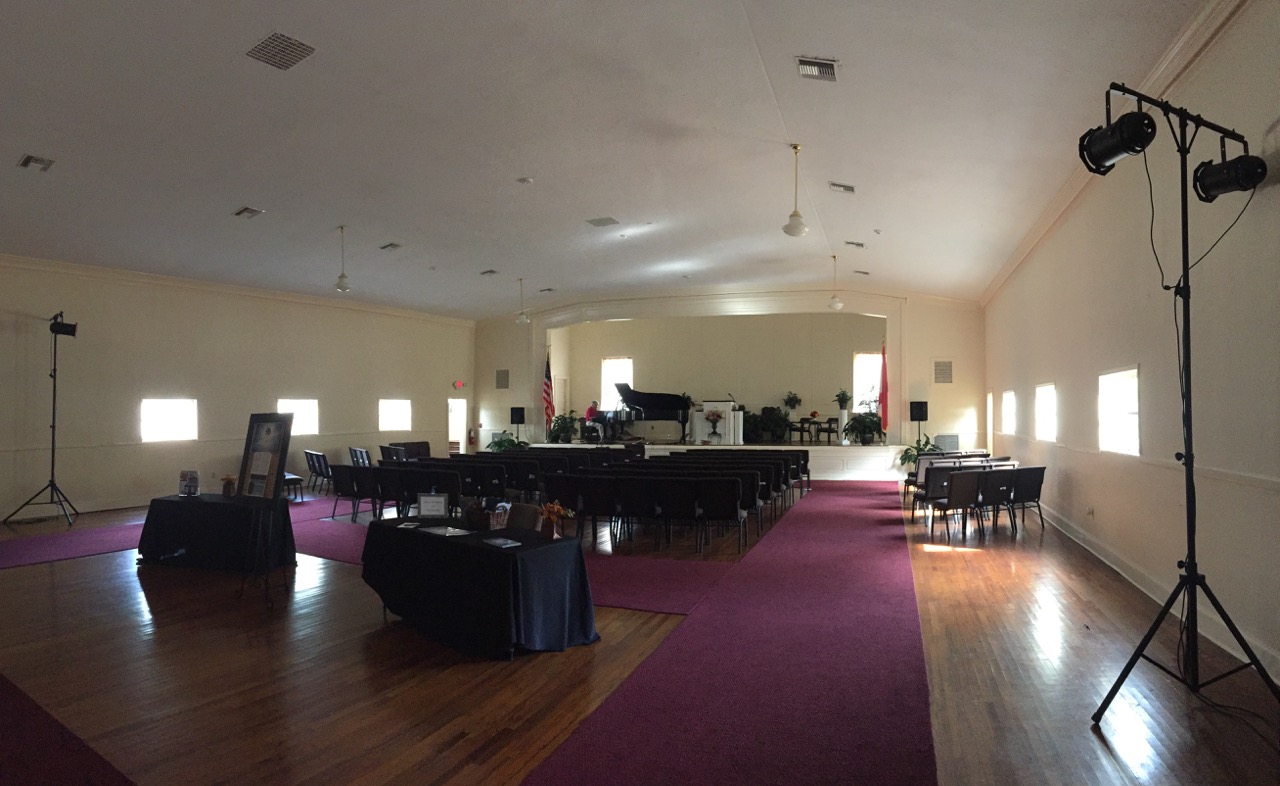 I recently bought a Zoom F8 and used it with no other preamps for the five tracks.

Hereĺs an overview picture of the session. The carpet under the piano was added on this session (our third) and made a huge difference. 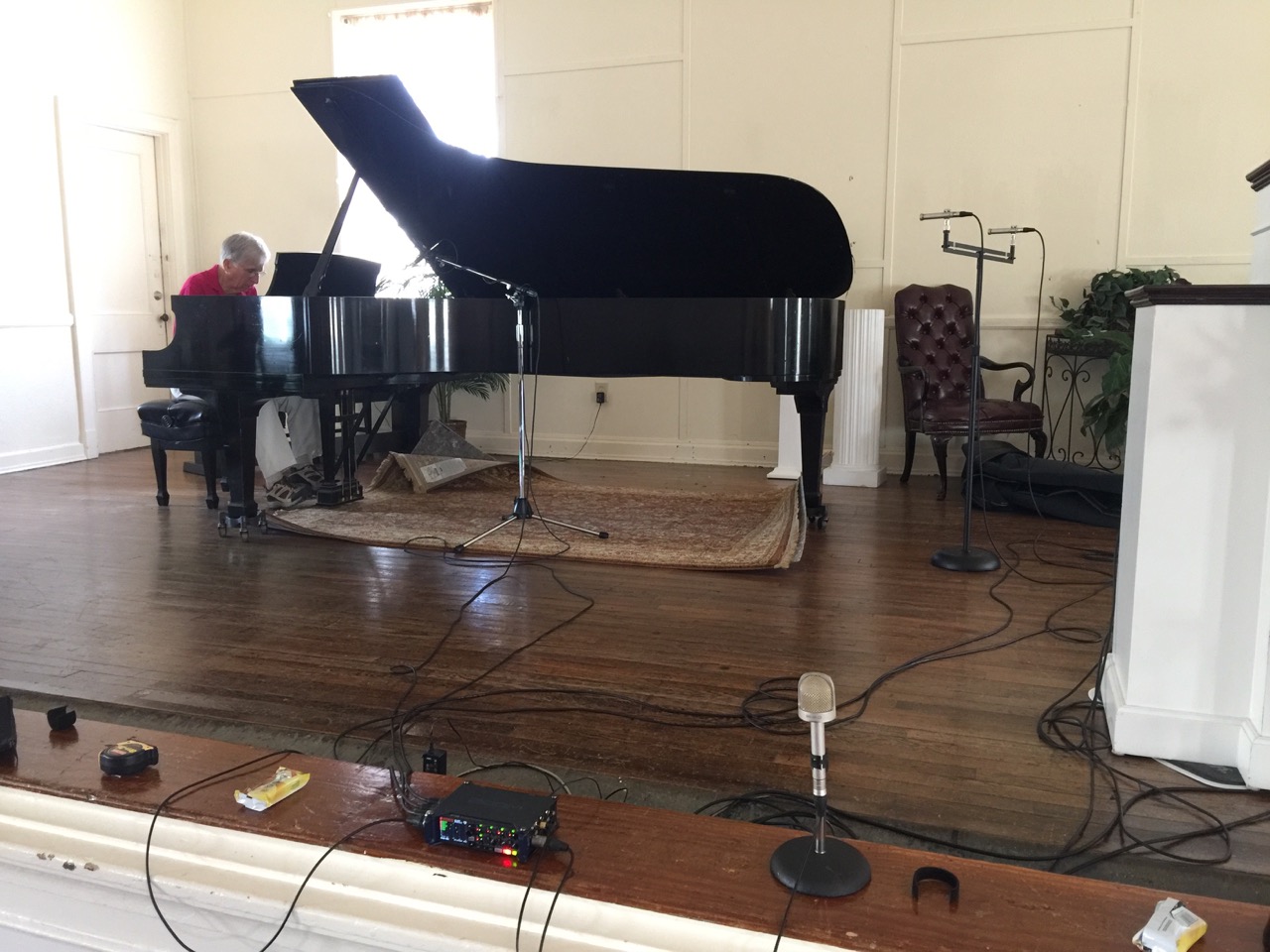 The two SD cardioids were mounted in an ORTF arrangement and placed 10 inches above the strings and 24 inches from the keyboard along the centerline of the piano. 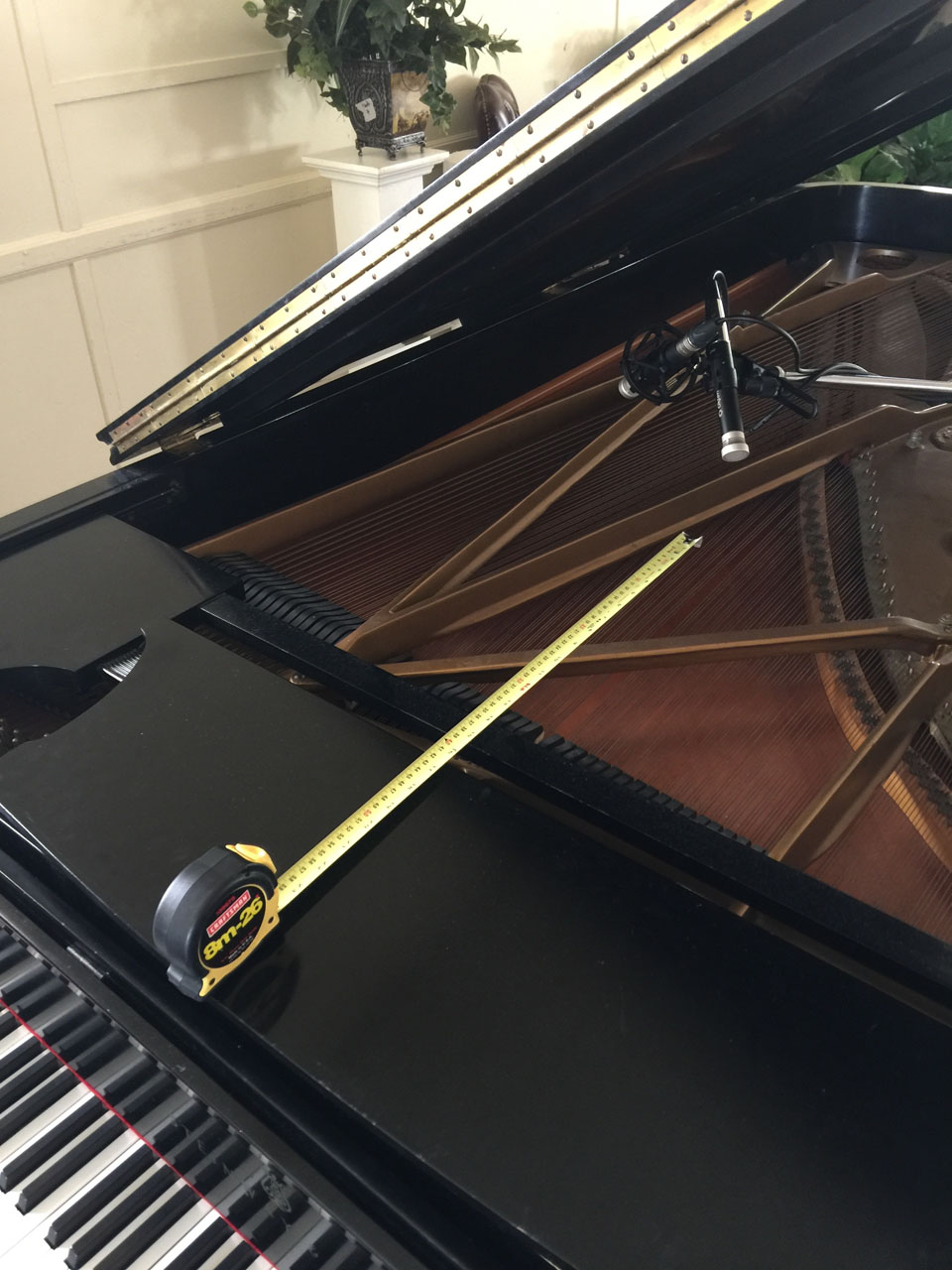 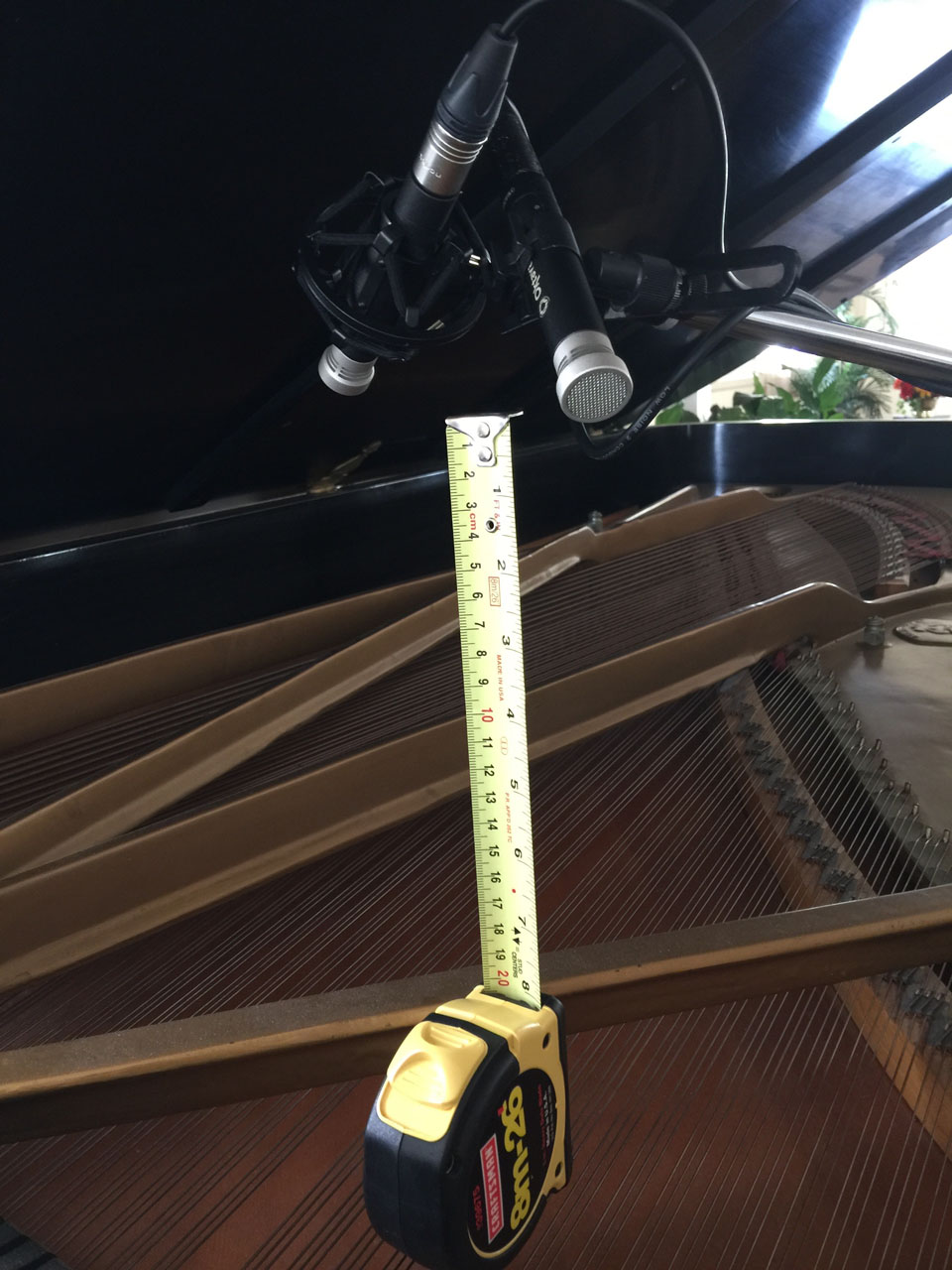 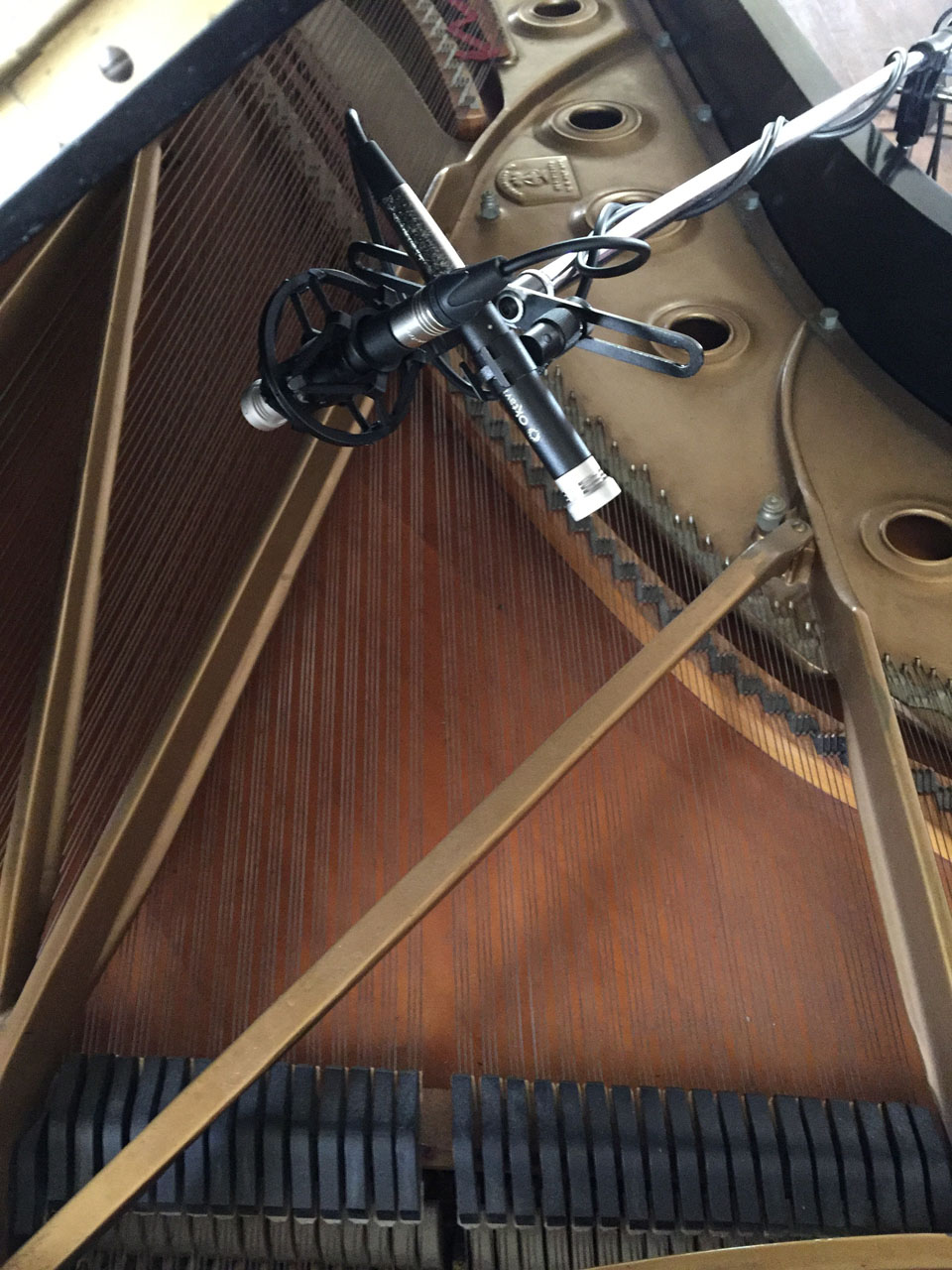 To allow the mics to overlap in the rear, I used one of the Oktava standard mic clips and an Oktava shock mount which is higher. The Oktava stereo bar supported the arrangement. The mics are spread at 110║ with a 17cm center-to-center capsule distance. (I also have the two-mic suspension holder and I may purchase a couple of the swivel heads to make ORTF easier.) 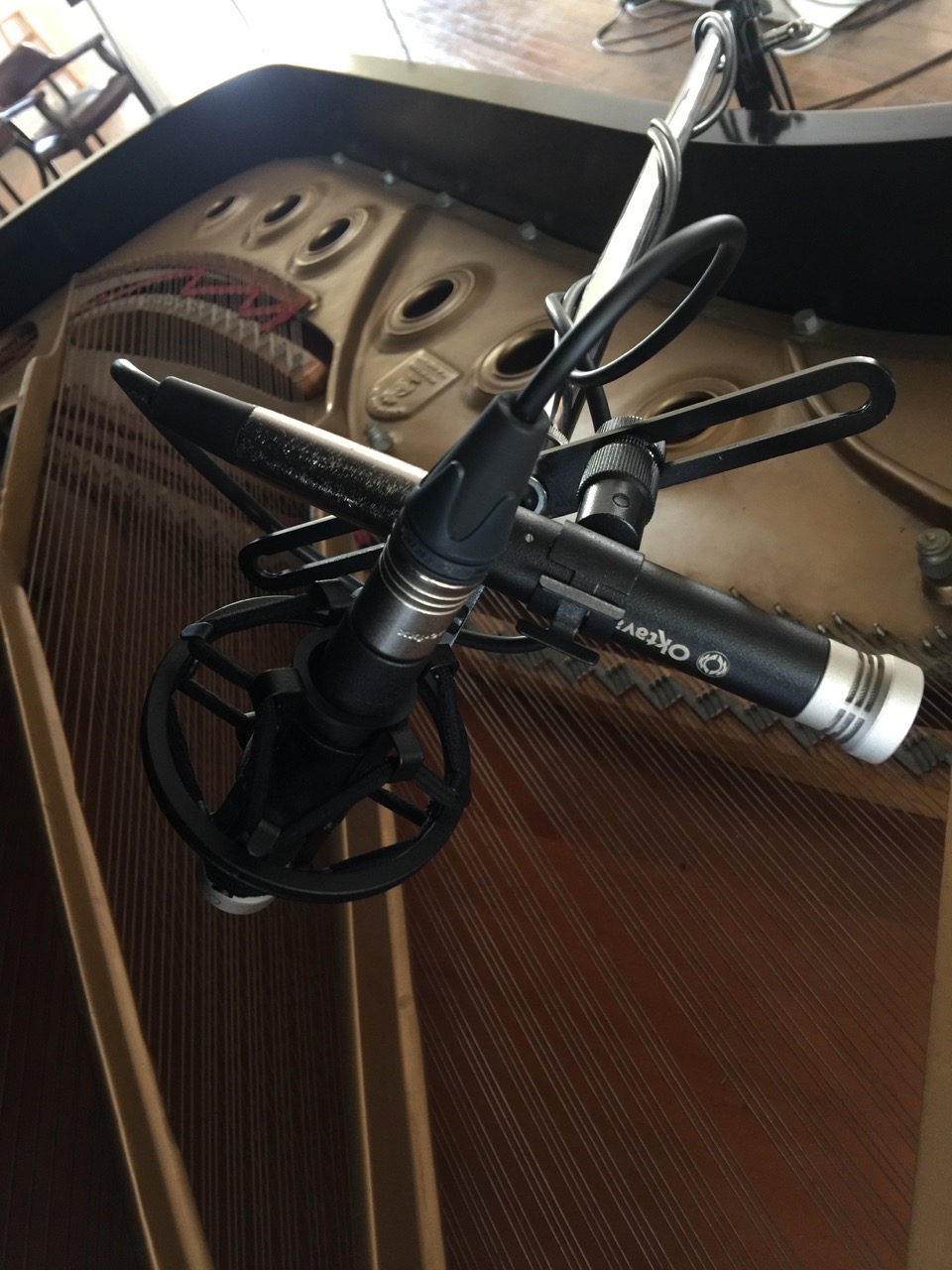 At the foot of the piano, I mounted two Oktava MK-012s with omni capsules. All of these capsules, by the way, came from my matched stereo kit which contained large and small cardioid, omni and hypercardioid capsules with two MK-012 preamps (bodies). The mics are spaced 60cm apart on a bar which I made.

The LD cardioid mic was placed on the edge of the stage in the center and facing out into the auditorium.

The recorder was set to 24 bits 48kHz sampling rate. The tracks were recorded mono and panned fully left and right except for the room mic. The ORTF pair and the AB pair were mixed at equal levels. We tried over and over with different mixing ratios and a 50:50 mix was our favorite every time. The room mic was added at 50db (yes!) below the 0db peak.

My feeling about the room mic was to add a minimal amount of ôlivenessö and room sound, yet make the recording as intimate as possible. We were not looking for a concert hall sound, more of a small or medium club sound.

Of course all that really matters is the recorded sound, so Iĺve included several samples for you.

Thanks for reading this. I hope you may be able to use it in some way to show others just how wonderful these Oktava products are.

Note: The first song recorded, Take My Hand Precious Lord, did not have the room mic. All others did.

I called this next song The Big Loud Hymn. Lew is out of town and I havenĺt had a chance to get the correct title. At any rate, I had asked him to really come down strong on the huge bass section of that Steinway.

Lew and I are in our 70ĺs, so we naturally gravitate to music of an earlier time. Hereĺs Billy Strayhornĺs classic Satin Doll. The Duke would be proud of Lewĺs performance.

Iĺve added David Ruskinĺs classic movie theme, Laura, as an example of some soft sounds. All the recording master levels were the same, so some of the songs never reached the peaks of the ôbigö songs. Hey, thatĺs the way it sounds, right?

Finally, Lew was getting into a groove on Margie, a big band standard that is usually associated with trombonist Jimmy Lunceford. Again, listen to the amazing dynamic range.